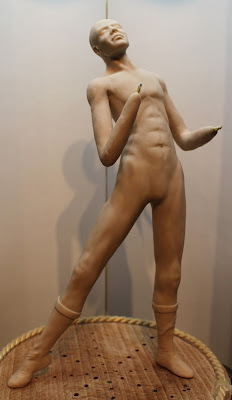 His torso and legs have been cured and sanded.  Using fimo liquid as a glue, arms and head have been added. 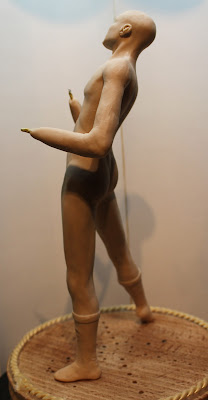 She has been sanded too and arms and head have been added.

As you can see her arm is very close to her body.  I will have to make sure that during baking the arm doesn't touch the body. I need room to slip the fabric of her dress between her torso and her arms. 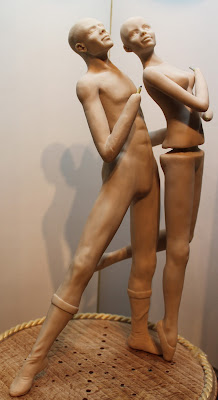 Just checking again to see how well they fit together.  The arms are in the right position. 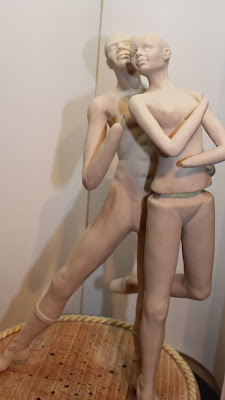 His right hand will be on her upper arm , his left hand in her waist. This has to be really exact to look good and credible

Look how his arm is close to her body and her leg goes behind his.   As this pose is right, the hands can now be added. 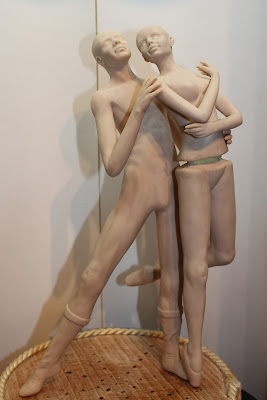 Hands added carefully.  Her hands are just not touching her body, his are on her body.  He's holding her very naturally 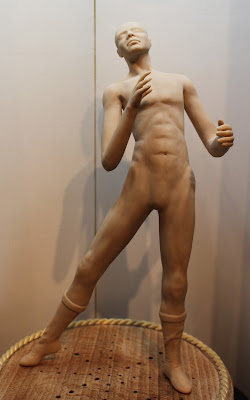 View of the male without the female.  His torso will not be more detailed than this, for the only reason that he will be dressed.   His tights will be painted, but the top part will be dressed. 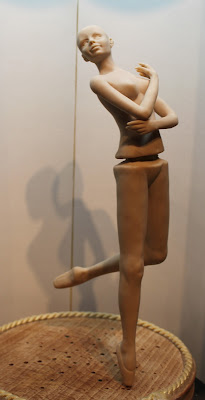 Before baking I slip some aluminum foil between her hands and her body, just enough to have room for the fabric of her dress later on.  Now both can be cured.
Gepost door Claudine Roelens op 13:56

Claudine Roelens
Making dolls is my life, my passion. I have been making dolls since 1993. I started out making very large dolls in air drying clay. Since a few years I now make smaller dolls in polymer clay. Living doll is my favorite brand of clay. Another passion of mine is baking. And now you can follow that on my new blog.

My dvd on how to sculpt a fairy 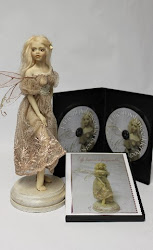